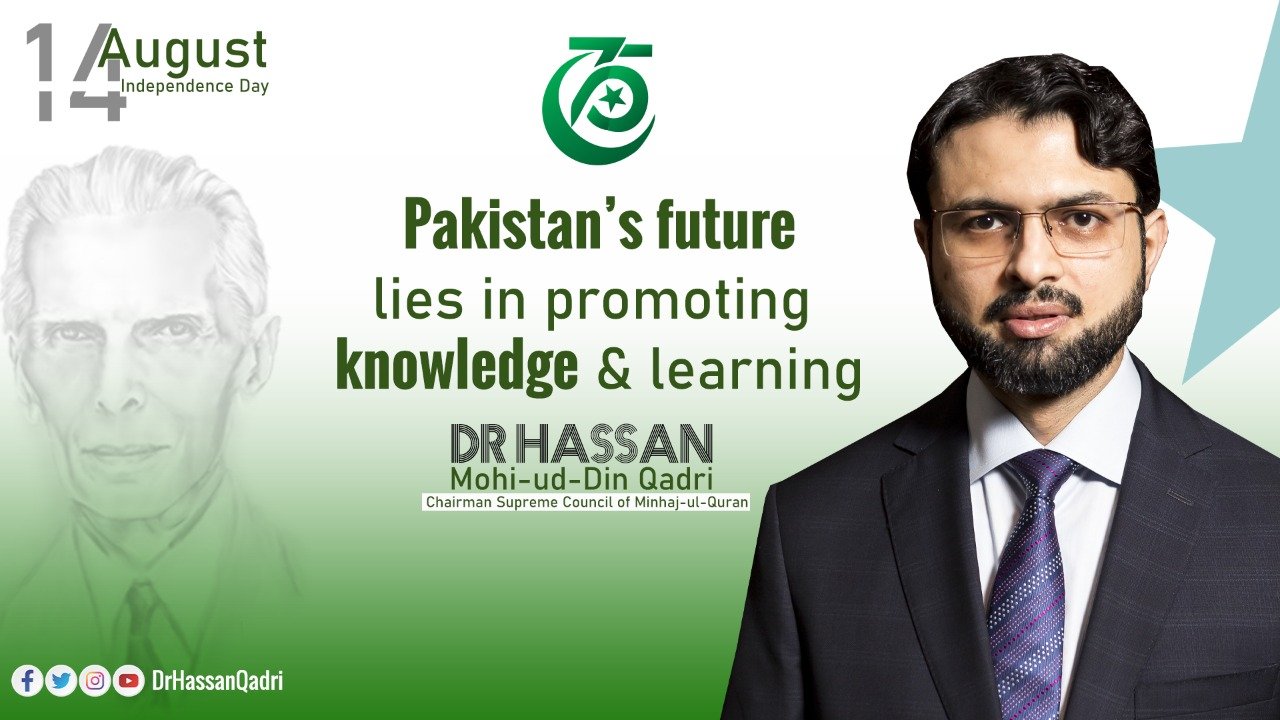 In a special statement on the occasion of the 75th Independence Day celebrations, Chairman MQI Supreme Council Dr Hassan Mohi-ud-Din Qadri has said where there is the rule of ignorance; there would be slavery and subordination. He said that every household needs to be turned into a center of knowledge to get rid of social, political and economic slavery. He said that today’s Pakistan is facing a clash between the forces of the past and the demands of the new age, adding that the youths are not ready to accept the attitudes that promote and support the status quo.

Dr Hassan Mohi-ud-Din Qadri said that the intellectual and educational movement spearheaded by Sir Syed Ahmad Khan played a leading role in the freedom movement. He said that the East India Company resorted to massacre and merciless oppression in order to making the people of the sub-continent their slave and strengthening their hold on power. He said that the first serious and effective effort to win back freedom was made by none other than Sir Syed Ahmad Khan in the form of the Ali Garh movement.

Chairman MQI Supreme Council said that the educational movement of Ali Garh produced an educated and enlightened leadership and infused a spirit for independence among the people, a process that led to the creation of Pakistan as the largest Muslim polity on the map of the world. He said that Pakistanis today face economic slavery and there is a need to run an educational movement on the lines of Ali Garh to free it from shackles, which is possible by making every household hub of knowledge and education. He said that the only way to getting rid of deprivation, want and slavery is the acquisition of knowledge.

Dr Hassan Mohi-ud-Din Qadri said that it is a matter of great satisfaction that our educated middle class is taking keen interest in the affairs of the country and want an end to the status quo. He said that failure to appreciate and analyse new dynamics will be dangerous. He warned that extremist reactions will be born if we continue to feign ignorance of the grave issues facing us. He said that the youths are not ready to accept the status quo; therefore, there is a need to strengthen and promote the personalities and movements at the state level that are working for the promotion of knowledge and learning.

Chairman MQI Supreme Council said that ad-hoc policies have caused a lot of damage, putting the country in the depth of crises. He said that outdated thinking and attitude wedded to the old ways of life is the biggest hurdle in the way of the change of system.

Dr Hassan Mohi-ud-Din Qadri said that Shaykh-ul-Islam Dr Muhammad Tahir-ul-Qadri has made MQI the movement of knowledge that is operating globally to promote education, enlightenment and awareness on the pattern of Ali Garh movement. Thanks to the personal efforts of Shaykh-ul-Islam, MQI has gifted the nation with Minhaj University Lahore, Nizam-ul-Madaris Pakistan, College of Shariah and Islamic Sciences, Minhaj College for Women, Tehfeez-ul-Quran College, and Minhaj Education Society where hundreds of thousands of students are getting quality but inexpensive education. He said that MQI is playing its due role in promoting knowledge and increasing literacy rate in addition to working for the promotion of peace, interfaith dialogue and harmony in the world.

#Pakistan is among the blessings of Allah Almighty, which came into being through countless efforts & sacrifices of millions of sub-continent #Muslims. Safeguarding Pakistan is crucial, so that this country could reach it’s rightful destination. #AzaadiMubarak