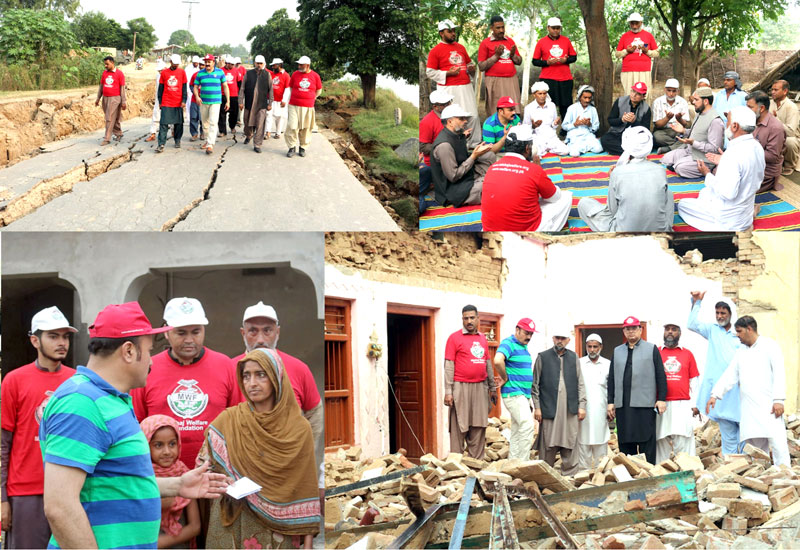 MWF extended financial aid to the affected families. The delegates visited Mirpur District hospital and handed over the medicines for the poor patients to the hospital superintendent and medical staff.

The affectees belonging to Dhok Phalli complained to the delegates that they have not been approached by any authority for the last three days. They said around 80% of houses of the neighbourhood were decimated due to earthquake and aftershocks and the people including the children, women and elderly are forced to live under the open skies in a helpless state. They said if at all the government functionaries visit them, they take pictures and leave.

Talking to the earthquake affectees, Noorullah Siddiqui said Dr Tahir-ul-Qadri gave special instructions to MWF to use all possible resources for the help of those affected by the earthquake, adding that it is on his direction that we have come to the affected areas to deliver the goods. He said MWF has stood by the nation during every challenge. He said service of humanity is our foremost priority.

Noorullah Siddiqui said we have visited many earthquake areas in far-off places. He said those affected by the earthquake are facing many hardships. He said mutual contacts and transportation have been badly affectedly due to destruction of the approach roads. He said that the affected families are in dire need of tents, medicines, and food. He said given the mass-scale destruction wrought by the earthquake, a massive relief operation needs to be launched. He said that the federal and provincial governments will have to get into action mode side by side with the armed forces of Pakistan so that the affected people could be helped and their difficulties eased.

Secretary Information said MWF is ensuring the provision of those goods that are direly needed in the affected areas. He said the government should immediately extend its help to those whose houses have been wholly or partially destroyed.

MWF Director Syed Amjad Ali Shah assured the affectees that MWF will use all available resources at its disposal to reduce the sufferings of the people. He said we are arranging the availability of medical staff and medicines for the poor patients. He said we pay rich tributes to Pakistan army for removing debris and rescuing those stuck post-earthquake. He said the communication system including roads has been destroyed in some areas of Azad Kashmir. He said that relief activities have not been started as yet due to the destruction of the communication system.

The delegation prayed to Allah Almighty to rest the departed souls in peace and grant recovery to the injured. The affected families thanked Dr Tahir-ul-Qadri and MWF for expressing solidarity with them during this hour.